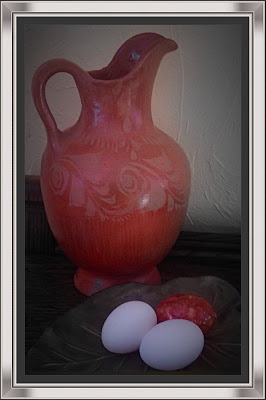 Happy Flash Fiction Friday! I'm back, and feeling much better than I was this time last week. I hope you enjoy this week's story. :-) 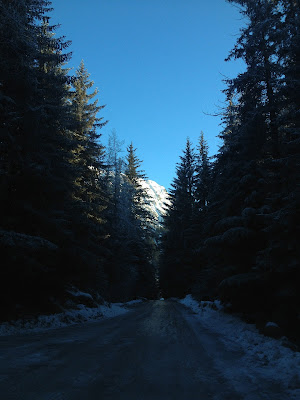 It's late Friday evening as I write this, and by now, you've probably noticed that this is not a flash fiction installment. My apologies for the interruption in routine, and I assure you that our regularly scheduled programming will resume in time for next week's Flash Fiction Friday.

Here's an oddity: the last time I read extensively about writer's block was in the mid-80s. I wasn't even a teenager yet. Since that time, I really haven't given writer's block much thought. What did I learn about writer's block when I studied it as a pre-teen? Mostly that it's a malady best solved by carefully applied self-discipline. I seem to recall that the prevailing theory in whatever it was I was reading (I have no memory of the title or author(s) of this material) was that insecurity and low self-esteem were the primary causes of writer's block. That's probably why I never bothered to read anything else about this topic. I have plenty of human flaws and frailties, but insecurity and low self-esteem, especially in regard to my writing, just aren't really my style.
I've always envisioned writer's block as a kind of wall, or even a gate, that once removed, blown through, or opened, led to...well...to a return to writing. I realized today that I periodically have writer's block and it isn't at all a blockage the way I've always imagined it. Instead, it's like a void. A black hole. A vast vacuum into which my words and inspiration are sucked. It's not that I can't come up with ideas, I have a zillion of those. It's not as though I can't write down words. As you see, I'm doing that right now. Instead, it's as though the magical force in my brain that squirts out stories just goes out for a long walk. Or a holiday. Or a sabbatical. I am what is known as a "pantser". I enjoy a bit of planning when it comes to novels, but my best writing comes to me in dreams and other messages from my subconscious mind. When those sudden bursts of "AHA" dry up, I'm not left with much to work with. It's not like I have a clever outline with all the twists and turns mapped out for me. Oh, my subconscious might have that outline, but it does not share that sort of information with my conscious mind. Where would the fun be in that?
Today, I decided that all of this feels very neurological. It really doesn't feel like a self-discipline problem, and it certainly doesn't feel like a self-esteem problem. It feels like a non-cooperative brain. In fact, prior to even recognizing that I might have an output problem this week, I was aware that I was swimming in the shallow end of the pool called depression. Whoops! That's no good. I have extensive experience with this and a host of cognitive, behavioral, environmental, and supplement strategies that I immediately began to implement, and I'm confident that I'll be out of the pool and drying off within a week. Meanwhile, I did a little internet research and discovered that, nowadays, writer's block is considered a neurological event. Apparently, my limbic system has given my cerebral cortex the boot and dear old lizard brain is running the ship while my fore brain has a lovely time-out. I'm determined to be back to my usual neurological activity soon, however, and promise that there will be a new flash fiction morsel here next week. 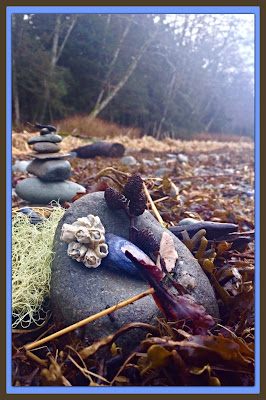 Hi folks, and happy Flash Fiction Friday!
If you haven't already, I want to encourage you to sign up to read this blog via e-mail. There's a handy sign-up box over on the right and once you do, you never have to worry about missing a single story!
I also want to mention again, that within the next week or two, I'm going to begin taking down my oldest stories on this blog, so that I can submit them elsewhere for publication. If you'd like to read (or reread) them, now is a good time. ;-) 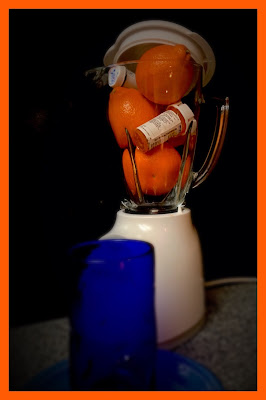 Happy Flash Friday!
Stories can come from obvious places, like people and events in our lives, but they can also come from mysterious places, deep in the strange,dark crevices and folds of an author's brain. Today's story did, indeed, come from a strange and mysterious place in my brain. It was inspired by the photo above, which was inspired by the lovely organic oranges that came in our housemate's produce box. Why did the oranges end up in the blender with the prescription bottles? I don't know, but it tickled my funny bone. At any rate, grab an orange to snack on and settle in for a strange little story that I hope tickles your funny bone.

O.Z.A.
Gerald opened his eyes and yawned. Mahina was still fast asleep, her lips parted as she breathed in long, low, whuffling lung-fulls of air. Gerald resisted the urge to wipe a smear of drying saliva from her cheek. She didn’t even smell like her old self, anymore. Where her perspiration and morning breath had once been a warm, almost musky scent, now it was as sweet and tangy as marmalade. Gerald swallowed back bile and glanced at the narrow gap where the drapes let in a sliver of morning light. It was still snowing outside.
Mahina had gotten sick a month ago when the first snow fell. It had started like an ordinary head cold, then progressed to nausea, chills, and a persistent, hacking cough. Day after day, Mahina’s breathing had grown more labored and her cough had deepened until it was a bone-rattling roar.
At first, the cravings seemed like a good sign. Oranges were supposed to be full of vitamin C, so Gerald figured eating a few a day would help boost his wife’s immune system. When Mahina devoured twenty oranges in three days, Gerald suggested she make an appointment with the family doctor. She didn’t, though, and when she stopped eating other food, he grew genuinely worried. When Mahina refused water, drinking only orange juice, Gerald took her to the emergency room.
It was a bad winter flu with a secondary lung infection, the E.R. doctor told them. Antibiotics and rest would have Mahina feeling better in no time. Gerald mentioned the oranges and the doctor shrugged.
“It’s the only thing she’ll eat or drink,” Gerald persisted, earning a sharp jab from Mahina’s elbow.
“I’m sure you’ll feel like resuming a normal diet in a couple of days,” the doctor said to Mahina, who shivered and zipped up her coat. “This antibiotic should do the trick, though you’ll want to eat some yogurt.”
“She’s never had any particular interest in oranges before. Do you think it’s a symptom of some kind of deficiency?”
“Hmm. Any chance you could be pregnant?” Mahina shook her head and shivered again. “Well, she certainly doesn’t have scurvy.” Gerald scowled at the doctor’s jocular tone.
A few days later, Mahina stopped coughing, though her voice remained low and raspy. She continued to eat oranges. Gerald was afraid to stop buying them. Afraid of what would happen if she didn’t eat at all.
The bedside clock read 6:04. Time to get ready for work. Gerald sighed and yawned again, then pushed a damp tendril of hair back from Mahina’s forehead. What was this? Alarmed, he peered more closely at her face, then her bare arms. Even in the dim light of the bedroom, he could see that her skin had grown rough and dimpled. Did she have some kind of rash? Hives?
Gerald drew a shaky breath. “Wake up, sweetie. I think we need to take you back to the doctor.”
Mahina smiled, then opened eyes that glowed like twin orange suns.
“We’re not going to the doctor, Gerald.”
“We’re not?” Gerald whispered.
“No. Not the doctor. We’re going to Florida.”
***
The old man rubbed an aching knee and nodded at the eldest of the children gathered around the fire with him. The youngster added another stick to the fire and sparks shot into the dusky sky.
“And that…that is how the orange zombie apocalypse began,” Gerald said, glad the darkness of the evening hid his tears.
Posted by Unknown at 7:01 PM No comments: