This bench has a special purpose. 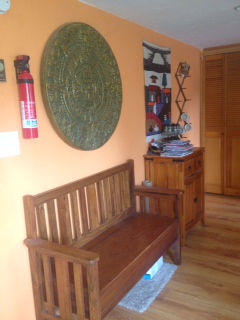 When I prepare food, I often ask Jeb to help me in the kitchen.  He closes the fridge and various cupboards and drawers on command.  He also operates the salad spinner for me.  Between tasks, I tell Jeb to “go supervise” and he jumps onto this bench to oversee matters.
Yesterday, as I was preparing dinner, Jeb began to sniff the bottom of the smoke detector.  I grinned as he glanced over his shoulder at me and he returned to his investigations.  A few moments later I noticed that he’d moved from sniffing the fire extinguisher to the light switch.  Then, with a push of his curious nose…TaaDaaa! He turned the light on!
Meal preparation came to an abrupt halt as I gushed praise and quickly chopped a handful of cheese cubes.  I was thrilled!
With cheese cubes in hand, I stood next to the bench and prompted Jeb to repeat the process by touching the switch myself and saying, “touch”.  If I am thrilled by the behavior of my brilliant dog, he is thrilled by cheese cubes and in less than five minutes he’d turned the switch on three more times and eaten several ounces of cheese!  Several hours later, right before bed, we repeated the exercise with good success and this morning we did so again!
At first he seemed to be pushing the switch with his nose but I caught it on video several times and have been able to slow down the action.  Check it out! 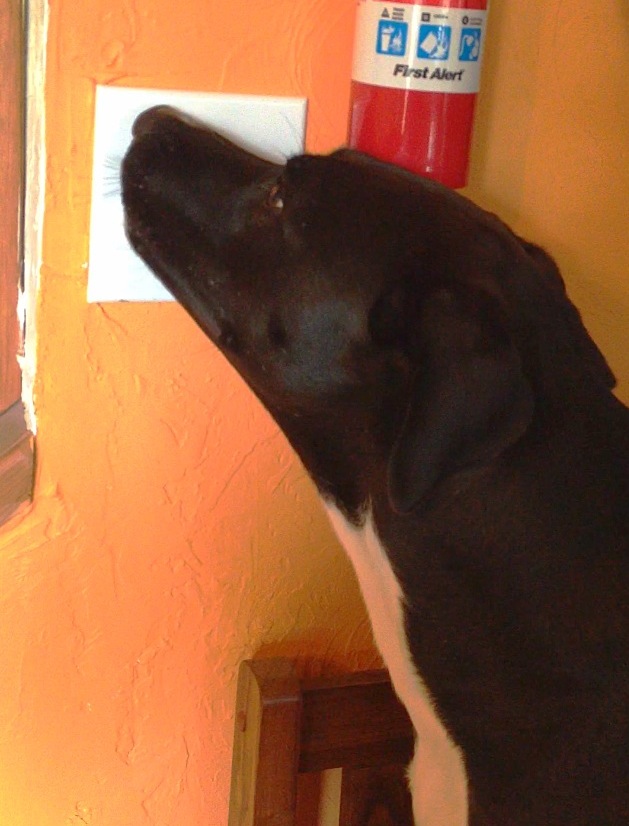 He’s actually grasping the switch with his lips to turn it on!

I'll continue to practice this new skill with Jeb until he's mastered it and then I'll select a new command word ("touch" is too general) that I'll add to the mix until he can run across the room, leap onto the bench and turn the light on at my prompt!
Then all we'll have to figure out is turning the light OFF.
What perfect moments have you experienced lately?  Do you have 4-legged companions that provide you with perfect moments?